There is a famous saying that when two or more people are about to cause an undesirable situation, then the smart guy among them can respond in the following four ways −

●      He should first try to avoid the situation while if he can.

●      If things have moved well beyond that point, then he could attempt to alter the situation by channeling the conversation towards something more suitable.

●      If that isn’t an option anymore, then he may change his behavior to suit the situation.

●      If all the above three options have been declared null and void, then he has to prepare himself and take steps to face the worst case scenario, which is – accepting the situation and its consequences.

These four steps also tell us how people have tried over the years to find a way of dealing with stressful situations. People tend to blame a different world, a changed time, different activities, etc. for increase in stress. However, stress has existed since the time people have started working for compensations.

Many people employ the same four tactics to handle stressful situations, however, they don’t realize that they need to follow the same sequence too. Most of the people keep meek and accept the consequences first, and later retrospect why they didn’t try and avoid the situation in the first place. In scenarios where avoiding the situation isn’t an option, things could have been channelized to something else.

Many people try to justify their age-old detrimental habits by saying, “A leopard can’t change its spots”, but we’d like to disagree. People just don’t “have” bodies that work sufficiently well without seven hours of sleep, the same way people aren’t just “resistant” to the ill-effects of alcohol and other intoxicating substances.

It might so happen that these peoples’ bodies have conditioned themselves to the unhealthy routine, however it doesn’t mean that their bodies are thriving because of their schedules; their bodies are at best, trying to perform as efficiently as possible in a negative environment.

There are many ways to handle stress, and often a lot of ways in which we can change our approach towards that situation, or at times, change the situation to make it less stressful.

As we have mentioned earlier, the first approach to handle stress is to simply alter or change it. This can be done by the following ways −

●      Think something positive; this will help you have a positive attitude.

●      Do something creative and unique.

Here are some examples that will help you understand this approach −

●      You find visiting a doctor stressful. You decide to think positively about it- “If I get this over with, it will be done for a whole year.” You also decide to bring along some relaxing music to help you cope with the appointment and distract you.

●      You find talking to your teacher stressful because they might scold you. You decide to think positively” If I interact now, my concepts will be clear and I can improve my grades.”

●      If the traffic has become heavy on your evening commute, you decide to take a different route or you start little early.

Altering stress is one of the most positive steps one can think of. When you control the situations and change it to something less stressful, you are taking power in your own hands by not letting the situation dictate your actions. But this step cannot be used always. There might be situations where −

●      Altering the situation to a situation that is not safe. For example, you find wearing helmet makes feel stuffy, so you might not want to wear it, which is a grave mistake.

●      Altering the situation by transferring the stress to someone else, which – let’s face it – is just mean.

While altering situations, it is important to know whether you alter it to appropriate actions or the inappropriate ones. Make the efforts worth a long-term benefit. Before doing something, remember to involve everyone and discuss with them whether your new actions are appropriate and helpful.

Previously we discussed about controlling the situation and being in power to make situations lesser stressful. Here, we will be adopting a different approach to handle stressful situations by completely avoiding them.

The second A stands for Avoid. If eating lentil-sandwiches gives you indigestion and causes you stress and embarrassment at work, don’t eat it! This A deals with identifying the simple things that you stress about unnecessarily and eradicating those items from your life. This A is suitable in situations if −

●      Repercussions are non-existent or extremely minor

●      Other people are not negatively impacted

It is not advised to use this approach, if avoiding the situation leads to more stress in future, like avoiding a doctor’s appointment. Also, you shouldn’t avoid situations to shift your stress to someone else, which will negatively impact your relationship with him.

A positive strong tool to avoid stressful situations is the “Positive No”. This tool helps you to say no in such a way that the situation is controlled in a constructive and assertive way. Initially, people might be taken aback by your approach, but they will realize that you have an equally important task and will adjust their work-styles to suit yours.

Benjamin Franklin once said, “In this world nothing can be said to be certain, except death and taxes.” Our last but not the least A will help us manage things that cannot be changed.

Our third A will help us handle things which needs to be completed, even if we like it or hate it but that cannot be changed. The best thing to do in these cases is to accept the situation and be positive about it.

The third A is all about handling situations which are not in our control and make our life less stressful. We can also use some techniques from first A that is to alter our attitude towards a situation and make it less stressful.

●      Visiting a relative who is not very pleasant.

Accepting the situation is appropriate when −

●      The task cannot be avoided and has to be completed eventually.

●      Neglecting it may cause more stress later to you or another person.

Accepting the situation is not appropriate when −

●      You are doing things just to please others.

●      Neglecting or changing it might reduce your tension than accepting it.

●      You are left with no other choice except accepting the situation.

There are times when people feel that accepting situations as they are, makes them feel helpless and powerless, but this is not true. The best part is you are learning to accept the situation as it is and are able to deal with it rather than avoiding or altering it. Generally, the power of choice helps reduce stress to great extent.

Let’s take a simple example which we have discussed earlier. Visiting a doctor for regular checkup instead of neglecting it. If you go ahead to visit the doctor, you could gain things from it, like −

Another method to handle unchangeable situations is to look at it in a positive way, negative thinking will never do good and cause more stress in your life rather than solving any problem. 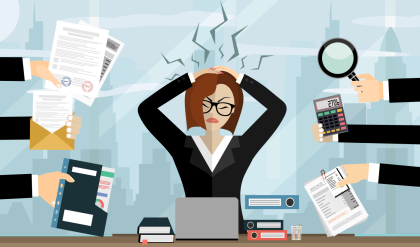 Workplace Stress – Getting a Low-Stress Life